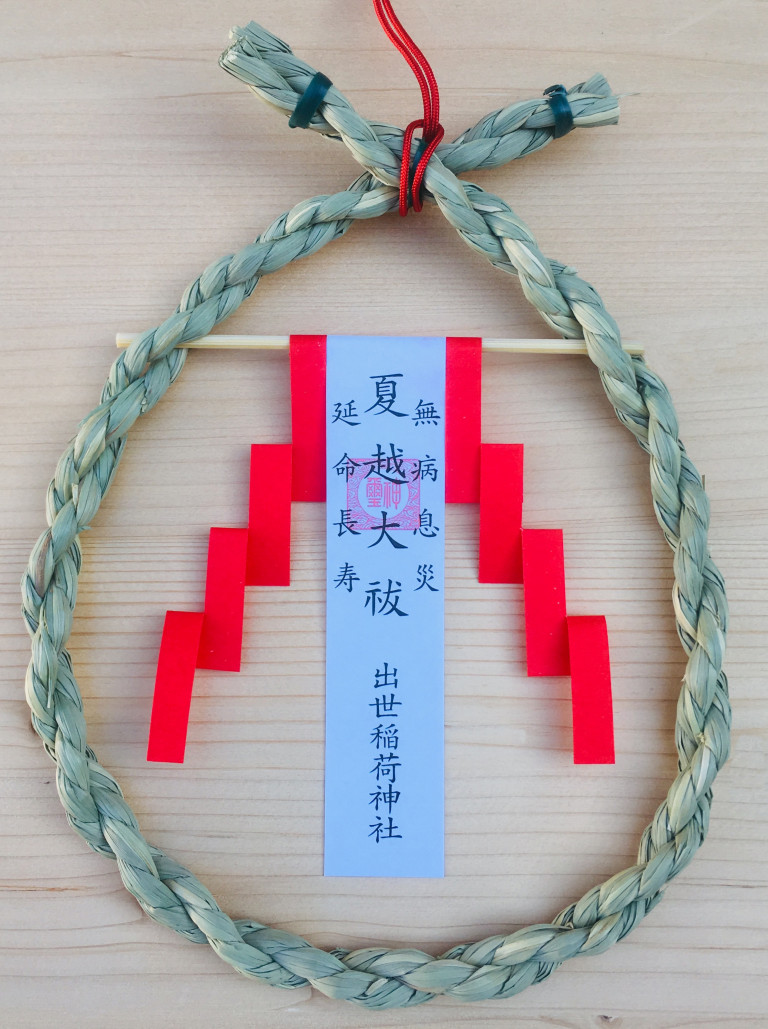 It is only sent as part of the Nagoshi-no-Harae Package. 夏越之祓パッケージをお申し込みの方に領布しています。

Legend has it that this mini Chinowa wards against bad luck.

Please treat the mini Chinowa the same as you would other Ofuda.

Please hang the mini Chinowa on or by the kamidana. If you do not have a kamidana, hang the Chinowa next to or below the Ofuda.

The Nagoshi-no-Harae is used in addition to the hitogata to recharge our spirits. It is customary to walk through a Chinowa, giant circle of reeds which is thought to help keep us safe from sickness and plague. Since ancient times in Japan, it has been said that this time of year, as summer arrives, plagues tend to strike. It is for this reason that we practice the Nagoshi-no-Harae ritual (including walking through the Chinowa) to offer prayers against misfortune, to recharge our spirits, and to avoid illness.

The origins of the Chinowa custom can be traced to ancient Japan, where it is connected with the stories of the Kami-sama, Susanoo.

One time when Susanoo was traveling, he sought a place to stay overnight. He visited the house of the richest man in the village, Kotan Shōrai, but Kotan refused. So Susanoo went to the house of Somin Shōrai, a poor man and older brother of Kotan. Somin welcomed Susanoo into his house, and, in return, Susanoo advised him to carry small Chinowa for protection.

Sometime after Susanoo left, a deadly plague arrived in the village, killing everyone except the daughter of Somin, who was protected by the Chinowa she carried with her. Susanoo returned to the village and said to her, “In times of plague, if you wear a Chinowa at your waist and declare aloud that you are the descendant of Somin Shōrai, you will be protected.” As this story spread, people began wearing Chinowa for protection against illness and misfortune. It is thought that people transitioned to walking through giant Chinowa instead of wearing them during the Edo period.

Chinowa are woven of reeds, which since ancient times is said to be a spiritual plant with the power to ward away evil spirits and prevent bad luck.